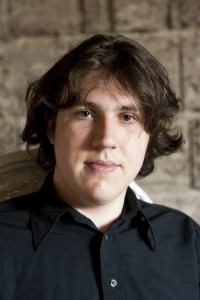 Having been raised under piano keys and those funny flashing knobs on music sampling machines and consoles; trained by a folk music production household at the foot of the Austrian alps to the avant-garde, contemporary and temporary auditory experiences in the middle of Vienna, he creates orchestral soundtracks, sweeping melodies and complementary atmospheres for films and video games.

Born in 1993 the young Austrian music for games and film always fascinated him. He set the score for various scenes at the Vienna Film Music Prize and finished runner up two times in a row (2011/12).  He achieved major step up in his musical abilities by attending the Hollywood Music Workshop in Klosterneuburg from 2008 to 2013. This also gave him the opportunity to work with established film composers like Don Williams, Bruce Broughten or Conrad Pope and accommodate himself with the film music business.

After several international music productions in collaborationship with Daniel Wehr for major American TV Channels, Sony Resistance: Burning Skies (Orchestration/MIDI-Preperation) or the film The Return of Elias Urquijo (Orchestration) his compositions for concert also are performed in cities all over the globe (London, Vienna, Auckland etc.). He scored plenty of films in Austria, Germany, UK and US of aspiring directors and is also writing music for the international music library EON Sounds Productions, RavenRed, Klanglobby and the sound library Vienna Symphonic Library or IK Multimedia.

2014 he graduated in composition at the private conservatory Vienna under prof. Christian Minkowitsch and also has been studying piano under prof. Natasa Velkjovic at the university of music and performing arts Vienna since 2011. From 2014 he is now a master student under prof. Ulrich Reuter and Karim Sebastian Elias at the film university Babelsberg Konrad Wolf based near Berlin and also taken an exchange term at the Royal College of Music, London, in 2015.

He is looking forward to intresting projects and considerable cooperations. Besides his mockup-productions, arrangement-works and orchestrations for example the school orchestras in Auckland, New Zealand, he works also for the Austrian company Stella-Musica.

In the years 2006/2008/2010/2012 achieved the 1. Prize nationalwide in the category “Piano solo”, including several awards for his own compositions (a.o. exceptional prize of the (“Österreichischen Musikrat”)

Orchestration & Arrangements for the Concert Hall

This website uses cookies to improve your experience. We'll assume you're ok with this, but you can opt-out if you wish.Accept Read More